Why is Venom so Popular?


With the comic book revival of the 90s, few characters are in the same league as Venom.  To quote one of the smoothest poets of the 1990s, “U can’t touch this.”  Those late 80s and early 90s kids who came into comic shops and first saw Venom were like “Booyah”.  If you tried to tell them that Venom was a fad they would have said “Talk to the hand ’cause the face ain’t listening”.  Well, those kids are all grown up and they still love Venom and for good reason.  It could be argued that Venom is more popular than Spider-man with comic book collectors, seriously.

Some of the older readers just had a heart attack so let’s give them a minute.  Anyone know CPR?  (Come on, I’m just having a little fun today.)

In most cases, after a movie is released there is a decline in interest but the opposite has happened with Venom.  Venom and the comics that he is associated with are even more popular.  Here at Comics Price Guide, we watch thousands of sales and Amazing Spider-man #300 is always #1.  It has been the top searched book for years.  That book is always easy to sell and always desirable.

If you look at the most popular Spider-man books today most of them center around Venom, the symbiote, or Eddie Brock.

1993’s Venom: Lethal Protector a 6 issue mini-series includes several first appearances.  The most popular being in issue #4 where Agony, Phage, Riot, Lasher, and Scream were introduced.

There are stories that make you empathize with Eddie and his cancer like the storyline “The Hunger”.  There are times where you see the tragedy of his life or reluctance to be a hero or choosing to be an anti-hero.  There are layers to Eddie and the symbiote attached to him.

Now look at what Donny Cates is doing in the hottest title around, Venom (vol. 4). 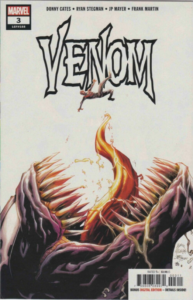 The symbiote world is predating our world with the entrance of the King in Black, Knull.  The god of the symbiotes was ruling the void before the Celestials came on the scene.  Knull created the symbiote race and killed a Celestial.  Knull was involved in the eventual creation of Knowhere.  Symbiotes have been scattered around the universes battling throughout time and space with heroes like Thor and Silver Surfer.  Do you see how insane this massive storyline is becoming?  In Secret Wars #8, the symbiote is a small black blob who attaches to Peter Parker and makes a cool black costume.  Now it’s an all-encompassing story that impacts the entire Marvel universe and that all started with Venom.

Is it shocking that Marvel Venomized covers throughout their lineup?  This is a resurgence of Venom and the symbiote gang that shows no signs of stopping.  Eventually, this rush will slow, but that day isn’t today.

We have been playing with all sorts of...
Curse of the Man-Thing