Siri, Who Am I? by Sam Tschida 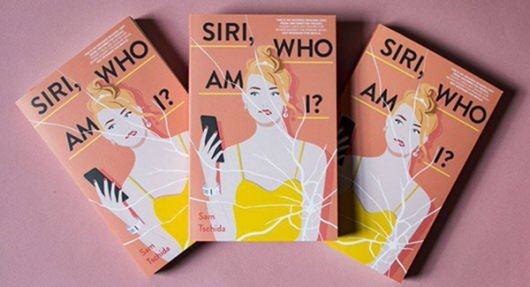 When Mia wakes up alone in the hospital with amnesia, she has only her shattered-screen iPhone to help her piece together who she is, why no one is looking for her, and whether the blunt force trauma to the back of her head she sustained was by accident or inflicted on her by an enemy. Thankfully, her cellphone’s voice-activated Siri app is still accessible and is able to point her in the right direction. Geared up in the yellow Prada cocktail dress she was wearing when she was brought into the ER, a disheveled Mia heads out into the streets of LA to reconstruct her life using clues attained from her social media accounts and phone contacts. Is she rich and famous? Is she a philanthropist or a criminal? Is someone trying to kill her? The more she finds out about her life, the less sure she is that she wants to return to it.

The story of an amnesiac with a massive head wound and possibly the victim of attempted murder who’s roaming around Los Angeles in a designer dress and no money should be a frightening tale. But with a humorous title like Siri, Who Am I?, Sam Tschida sets up her debut novel as an entertaining, lighthearted mystery-adventure.

Mia’s harrowing experience should have shaken her to the core, but instead she takes it all in stride. She can’t recall her own life, yet she’s managed to retained her knowledge of fashion, music, and pop culture, as well as her sense of humor and penchant for sarcasm, all of which is italicized and footnoted throughout this first-person narrative. She makes little observances about herself like, “I would make a great pimp” when talking to someone about matchmaking, and questions herself “Am I a T-Swift fan?” when she realizes she knows the phrase “Haters gonna hate.”

Although nearly a blank slate, Mia is, impressively, instantly likable. You hope she’s a long-lost princess who will get to return to her fairy tale life (she actually was wearing a tiara when she was brought into the ER). Even when there’s evidence that in her past life she wasn’t always on the up and up, you still root for her. Maybe Mia losing her memory was the best thing that could happen to a person like her, not counting the whole possible attempted murder victim part. I loved that the hospital nurse pegged her as a vegetarian and she ran with it. I also liked how she kept remembering little things about her personality and then would assess whether it was a positive attribute or something she’d want to change in the future. And even through all the chaos of the unknown and the existential crisis she’s in, Mia still managed to make some friends, people who were genuine, which was a welcoming aspect to her situation.

In an era where people rely on their smartphones as an extension of themselves and often ask Siri questions like “Where am I?,” Mia’s journey of self-discovery via apps doesn’t seem so far-fetched.

There are some parts of the story that are preposterous, such as the absence of the police after an unconscious young woman is brought to the ER with her head cracked open. I kept wondering when the hospital staff was going to call in a social worker to help this poor young woman! But then again, that would have left little for the protagonist to do on her own — having Mia take all the risks and follow all the clues herself is a much more interesting route than a stuffy official investigation would be. And it’s Mia’s own sleuthing that makes “Siri, Who Am I?” a fun, worthwhile read.

At first it seems like this book might be aimed at the older end of the YA audience, especially with its social media heavy aspects, frequent use of Internet lingo and hashtags, and Millennial love triangle, but then the tone does unexpectedly get raunchy at some point. Also, this is a Quirk Books offering, which means, you guessed it, there’s gonna be quirkiness. This publisher always offers that little edge of uniqueness in the storytelling that makes it a standout from a typical fiction novel, and Siri, Who Am I? fits the mold.

A Millennial with amnesia uses her Instagram account to piece together her identity in this hilarious and whip-smart comedy about the ups and downs of influencer culture.

Mia might look like a Millennial but she was born yesterday. Emerging from a coma with short-term amnesia after an accident, Mia can’t remember her own name until the Siri assistant on her iPhone provides it. Based on her cool hairstyle (undercut with glamorous waves), dress (Prada), and signature lipstick (Chanel), she senses she’s wealthy, but the only way to know for sure is to retrace her steps once she leaves the hospital. Using Instagram and Uber, she arrives at the pink duplex she calls home in her posts but finds Max, a cute, off-duty postdoc supplementing his income with a house-sitting gig. He tells her the house belongs to JP, a billionaire with a chocolate empire. A few texts later, JP confirms her wildest dreams: they’re in love, Mia is living the good life, and he’ll be back that weekend.

But as Mia and Max work backward through her Instagram and across Los Angeles to learn more about her, they discover an ugly truth behind her perfect Instagram feed, and evidence that her head wound was no accident. Did Mia have it coming? And if so, is it too late for her to rewrite her story?