Review: Transformers/Back To The Future #4 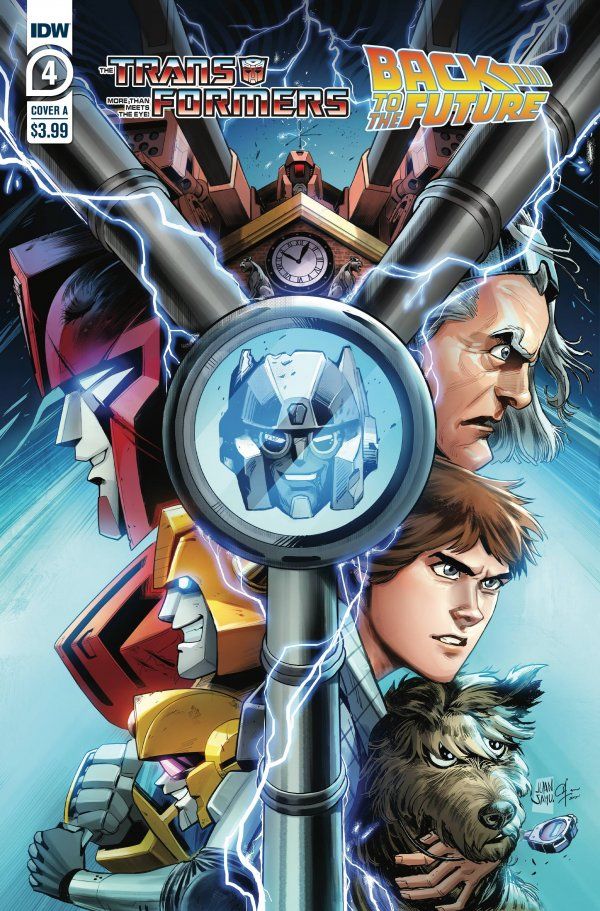 Transformers/Back to the Future will stand the test of time to be one of the most transformative series in sci-fi crossover history. Cavan Scott has shifted the paradigm to allow for this crossover to create substantive changes to both properties by the end of the tale. Embracing the nature of the multiverse and its infinite possibilities rather than forcing the properties to return to their possible boxes is a brilliant move which should be embraced by more crossovers. It has been done to some degree with G.I. Joe/Tranformers in the past but too often properties feel the need to reestablish the status quo rather than allow room for an expansive universe which embracing the ripples their characters have created. This miniseries has been the comic I’ve enjoyed and anticipated the most in 2021, and seeing it draw to an end is bittersweet.

This issue is a classic journey across time beginning in the ‘future’ in 2015 with the shocking entry of the latest villainous Transformer…the iconic Hill Valley Clock Tower itself. Watching a transformed hoverboard Skilz battle Watchtower alongside Rodimus while Marty is saved by the transforming Delorean Gigawatt is a massive treat. The issue is packed so we move away from this much too quickly. Here’s hoping the Watchtower makes its return for a longer battle in a future miniseries sequel. Gigawatt is injured so in order to get him and Marty to 88 mph, Doc rides the transformed hoverboard and risks everything to push it.

Marty and Gigawatt arrive in the present and stop Rumble from stealing the Delorean. Rumble has the upper hand until Marty is saved by Biff Tannan. Rumble escapes into the arc to wake up the Decepticons only to find that Marty and Gigawatt have already woken Optimus and the Autobots. They all team up to take down Rumble but at the cost of Gigawatt’s life. Marty returns to 2015 to find Rodimus is now Hot Rod and find that Gigawatt and Skilz are still alive with the help of the Autobots, Doc and their mechanic Biff.

Marty returns to 1985 where the Autobots are watching him from a distance, not realizing that his brand new truck is…a Decepticon. The art throughout the issue is a massive step up, the detailed art by Juan Samu has an animated flavor but still keeps you rooted in the story and characters. The sequence with Watchtower and the battle with Rumble are absolute gems and Samu has the skill to create sublte changes of tone in each scene with his skilled work alongside Candice Han’s bright, brilliant colors.

Every crossover event should feel this important, this epic in scope and create these types of ripples. All we can hope for is that is not truly the end as the final page hints at. We really needed a big banner at the end exclaiming it will be continued as with the original BTTF film. Here’s hoping the sequel brings back this same brilliant team as does not take quite as long to come to fruition as the second film.